To share your memory on the wall of Kevin Leo Dwyer, sign in using one of the following options:

Raised in South Boston, Kevin was the son of the late Richard M. and Ethel L. (Baxter) Dwyer. He served honorably in the US Army during the Vietnam War, earning the sharpshooter badge. Kevin attended Wentworth Institute for mechanical engineering and completed a VA program for air conditioning and refrigeration. He worked in the industry for 37 years, including many years with MacDonald Mechanical, before retiring.

Funeral services at the Acton Funeral Home, Acton, are private. According to Kevin’s wishes, burial will be in the family lot in Mt. Hope Cemetery, West Acton, where his two infant children are interred. Memorial gifts may be made in his memory to one’s favorite organization or charity. Memorial page actonfuneralhome.com
Read Less

Receive notifications about information and event scheduling for Kevin Leo

We encourage you to share your most beloved memories of Kevin Leo here, so that the family and other loved ones can always see it. You can upload cherished photographs, or share your favorite stories, and can even comment on those shared by others.

Posted May 10, 2021 at 08:47pm
Kevin was my cousin. We were out of touch for many years, but I have many fond memories of him. We worked together for a time at MacDonald Mechanical. During this time, he yelled at me for speeding on the Mass Pike in a tiny Honda - more than once. He could have possibly saved my life during my “lead foot” phase.

My earliest memory of Kevin is he and his brother Richie telling me the daily Castor Oil I was swigging from a refrigerated bottle was “gross.” I was probably 4 or 5 years old. My father (who I worshipped) would have a swig of Castor Oil from the fridge every day, and of course, I wanted to be just like him and have a swig too! Kevin and his brother Richie let me know that Castor Oil was disgusting. Of course, I listened to my super cool cousins, so I stopped swigging Castor Oil, much to my father's disappointment. I credit Kevin and Richie for saving me from years of fish-tasting burps. Many years later, they expanded my musical tastes and introduced me to “The Who” and “The Rolling Stones,” a massive improvement from “The Monkees.” Good times. Rest in Peace, Cousin.

Posted May 08, 2021 at 05:14pm
Kevin was 10 years older than my brothers and sisters. I remember when we were little kids, Kevin and Richard and their mom came to visit us in Acton after a huge snow storm. Kevin had us diving off the porch head first into the snow. He would then grab us by our legs and pull us out , lift us onto the railing so we could dive in again. One of my favorite memories. Thanks Kevin Peace
Comment Share
Share via: 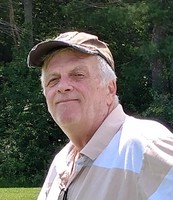