To share your memory on the wall of Kenneth M. Simpson, sign in using one of the following options:

Provide comfort for the family by sending flowers or planting a tree in memory of Kenneth M. Simpson

Born in Greenville, Maine, he was the son of the late Clifton and Doris (Dutton) Simpson. He spent a happy childhood with his family, including two younger siblings Christiana and John, in Monson, Maine. A class officer and graduate of Monson Academy, Ken excelled in academics and was very involved and had leadership roles in countless student activities. His family fostered a strong sense of community, and Ken’s kind, gracious and gregarious disposition served him well in this capacity throughout his life.

Ken worked at Pratt & Whitney of the United Aircraft Corp. in Hartford, CT for a year, and it was during this time he met and fell in love with his future wife, Bernice Amelia Olson, whom he affectionately called “Snookie.” The couple married in 1948.

Ken served honorably in the US Army Air Force during WWII as an aviation cadet, and went on to serve as a Captain in the USAF reserves until 1957. A graduate of the University of Connecticut in 1950 with a bachelor of science degree in business administration, he also completed coursework at Harvard University and North Carolina State University.

A sales executive at 3M’s technical ceramics products division for 38 years until his retirement, Ken’s community service continued in CT where he was a member of the Grand Lodge A.F. & A. M. for more than 65 years, and was a member of the Supreme Council of the Ancient Scottish Rite for the Northern Masonic Jurisdiction of the USA, Boston Valley.
During the more than 62 years he called Acton, MA his home, he was a tireless contributor and mentor in the community. He was recognized for outstanding club leadership by the Kiwanis Club of Concord, MA, and was involved in fundraisers and endowments to benefit people in Lyttleton, New Brunswick through the Miramichi Rod and Gun Club, where he was a member and record holder over the years.

True to his Maine roots, Ken was a real outdoorsman, and especially loved time spent fishing with his son Mark. He was also passionate about hunting, sailing, skiing with the family at Squaw Mountain in Greenville, and walking his land. A Civil War buff, he enjoyed reading, particularly historical non fiction, was interested in stamps, coins and antiques, and played saxophone in bands throughout his life including the Shriners club band and Maynard Community Band

Ken always had time for his family and especially enjoyed time annually at the special hunting and fishing camp on Tim Pond that included fishing competitions among the family members and friends. In later years, Ken was a devoted and gracious caregiver to his wife, Bernice. A dedicated "Grandpa," "Pappo" and friend, he will be missed beyond words.

The father of the late Mark Kenneth Simpson, Ken is survived by his wife, Bernice A. Simpson, who was always “Snookie” to Ken; two daughters, Holly Pettingill and husband Gregory of South Paris, ME, Kristen Simpson and husband Jack Koehler of Jackson, WY.; 4 grandchildren Matthew and Nathan Pettingill, Lindsay Rutton and Katie Koehler; his 2 great-grandchildren Noah and Tucker Pettingill; and a nephew David Nilsson and wife Caroline. He was the brother of the late Christiana (Simpson) French and John Lewis Simpson; and a sister in-law Elizabeth Bedker Simpson.

Visiting hours are Sun. April 18th from 2-4pm at the Acton Funeral Home, 470 Massachusetts Ave, (Rte 111) Acton. The funeral service is Mon. April 19th at 10:30am in St. Matthew’s United Methodist Church, 435 Central St. Acton, with burial following in Woodlawn Cemetery, Acton Center. Masks are required and social distancing will be observed at visiting hours and funeral services. In lieu of flowers, memorial donations may be made to either the Friends of Tim Pond, PO Box 207, Eustis, M 04936, or to the Monson Historical Society, PO Box 308, Monson, ME 04464. Memorial page actonfuneralhome.com
Read Less

Receive notifications about information and event scheduling for Kenneth M.

We encourage you to share your most beloved memories of Kenneth M. here, so that the family and other loved ones can always see it. You can upload cherished photographs, or share your favorite stories, and can even comment on those shared by others.

Posted Apr 22, 2021 at 08:20am
I was so saddened to read of Ken's death. You only had to meet him for a brief time to realize what a wonderful, and true gentleman he was. Ken was from the generation who garnered respect and admiration naturally. My life has been enriched by meeting him and I will always hold his visit to Monson as a treasured few days in my own life. Estella "Tootie" Bennett, Monson Historical Society
Comment Share
Share via: 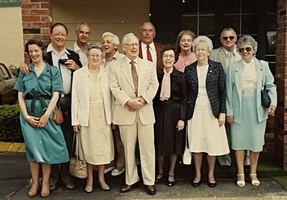