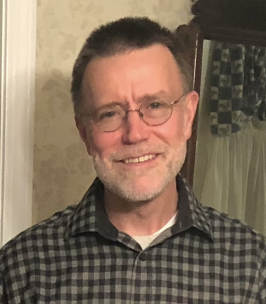 Born in Boston, Massachusetts, Larry lived for many years in Acton, MA before moving to Mays Landing, NJ. He graduated from Middlebury College and later earned an MBA from the University of Connecticut and a Masters Degree in Computer Science from Brandeis University. Larry was a longtime employee of General Dynamics Information Technology and its predecessor companies including CSRA Inc. and Computer Sciences Corporation. Larry was a parishioner of The Church of Saint Katharine Drexel, an active member of the Knights of Columbus, and a frequent volunteer at the Community Food Bank of New Jersey. Larry was passionate about his work in computer science, enjoyed long bike rides, studying history, literature, and The Bible, and was happiest spending time with his family and friends.

Survivors include his brothers, Matthew and wife Dominique, and Mark, his mother Suzanne, his nephew John, and his nieces Tori and Sara, his aunts Frances and Marguerite and many cousins.

Larry was preceded in death by his father, William L. Sexton Sr.

All are invited to visiting hours on Friday, November 4th from 4:00-7:00PM in the Acton Funeral Home 470 Massachusetts Avenue (Rte. 111) Acton. The funeral Mass will be celebrated on Saturday, November 5th at 10:00AM in St, Bridget's Church 1 Percival Street, Maynard. Burial will be private at a later date.

Memorials may be given to: