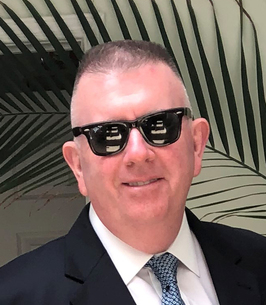 Thomas E. Cyrs III of Boxborough passed away unexpectedly on March 14, 2022. He was born on August 29,1962, in Newburyport, MA to Carol (McDuffie) Cyrs and the late Thomas Cyrs Jr. Tom was the beloved husband of Jennifer (Killian) Cyrs for 31 years. Loving father of Kayla Jayne Cyrs of Boston and Killian Thomas Cyrs of Boxborough. Cherished brother of Katie Ann Cyrs of Las Cruces, New Mexico and the late Judith Maria Cyrs. He was also the brother-in-law of Jeffrey Killian and his wife Barbara of Reading, MA. Also survived by several nephews, cousins, and extended family.

Tom grew up in East Bridgewater, MA and later moved to Minnesota and then to New Mexico where he attended high school and college. He graduated from New Mexico State University with a degree in electrical engineering. He also earned a master’s degree in Government from Harvard University. Tom was an employee of Raytheon Technologies for nearly forty years and was most recently Director of Japan Air & Missile Defense Requirements & Capabilities. He traveled extensively to Asia and the Middle East for his work and enjoyed immersing himself in the culture and customs of such countries as Japan, South Korea, Turkey, Egypt, India, and the United Arab Emirates.

Tom’s greatest passion was his family whom he loved dearly. He enjoyed traveling with them, both domestically and internationally. Their travels included Europe and Asia. Tom was thrilled to be able to bring his children to South Korea and Japan and introduce them to the culture and traditions of these countries. Two of his most cherished destinations were Martha’s Vineyard and Scottsdale, Arizona where he vacationed with his family every year. Tom also enjoyed entertaining at home and hosting many pool parties in his backyard.

Tom was an avid reader and enjoyed working on his golf game, perfecting his oil painting techniques, and rooting on the Patriots to many Super Bowl victories. Tom also coached and mentored many young athletes in both the Acton-Boxborough Pop Warner and Acton-Boxborough Youth Baseball programs for many years. Tom had a strong faith and was a communicant of St Theresa, the Little Flower Church in Harvard for nearly 30 years.

Tom will be dearly missed by his family and friends for his great sense of humor, selflessness, and love of life. Family and friends are invited to greet the family during the visiting hours on Friday March 25, 2022,from 4-7 PM at the Acton Funeral Home, 470 Massachusetts Ave (Rte. 111), Acton, MA. A Funeral Mass will be celebrated at 11:00 AM on Saturday, March 26, 2022, at St. Theresa, the Little Flower Church in Harvard, MA (15 Still River Rd). Graveside services are private at a later date.