To share your memory on the wall of Robert W. \"Bob\" Jack, sign in using one of the following options:

Provide comfort for the family by sending flowers or planting a tree in memory of Robert W. "Bob" Jack

Bob and his wife Betty were avid travelers and lifelong music lovers, especially opera. With degrees from Texas A&M, Stanford, Pepperdine and Columbia, Bob was an electrical engineer specializing in data storage and worked at Burroughs and Digital Equipment Corporation for the majority of his career. He was passionate about affecting the most positive change in people and volunteered at Score (a business mentoring organization) for 25 years and helped many entrepreneurs in their efforts to build new businesses. Bob also served his country as an Army officer from 1952 to 1954.

Services will be held in April 2021, in lieu of flowers donations can be made to The American Cancer Society,
P.O. Box 22478, Oklahoma City, OK 73123., also online at cancer.org

We encourage you to share your most beloved memories of Robert W. "Bob" here, so that the family and other loved ones can always see it. You can upload cherished photographs, or share your favorite stories, and can even comment on those shared by others. 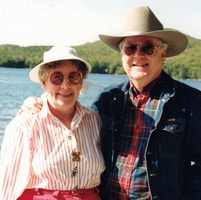