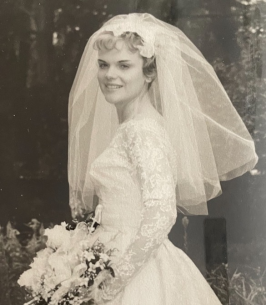 Phyllis Sue (Wade) Greeno, a longtime resident of Maynard and Shirley, passed away peacefully on Tuesday, April 12th at the Apple Valley Center in Ayer. She was 85 years old. She was the beloved wife of the late Albert H. Greeno to whom she was married for nearly 50 years at the time of his passing in 2011.

Phyllis was born and raised in Birmingham, Alabama, daughter of the late Samuel and Pauline (Watkins) Wade. She was raised in Birmingham but after her father’s military service brought the family to Massachusetts, she graduated from Arlington High School. She returned to Alabama to attend Auburn University but transferred to Simmons to be closer to home. Phyllis met her husband Al in Maynard as she passed him every day on her walk to work at the bank downtown. They were married in 1961 and settled in Maynard where they would raise their son Jonathan.

She worked for many years as the head teller at BayBank in Maynard where she greatly enjoyed time with her coworkers and interacting with the customers. She loved tending to her flower garden, and enjoyed reading, baking and dinners out with Al. She dedicated many hours to the Maynard Historical Society and in later years, volunteered at the Ayer Council on Aging. More than anything, Phyllis enjoyed time spent with her family, especially with her granddaughter Sydney. Time with Meme was treasured. Many hours were spent together baking, cooking, having sleep overs and picking out the next American Girl Doll. Phyllis will be dearly missed by her family and friends.

Phyllis is lovingly survived by her son, Jonathan Greeno and his wife Carol of Shirley. She was the beloved Meme to her granddaughter Sydney Ellen Greeno. She also leaves her brother Samuel David Wade and his wife Dot, of Acton, along with her cousin Joyce Hames and her daughter Melea Hames of Alabama. Sadly, in addition to her husband Al, she was predeceased by her cousin Clyde “Bobo” Wade Jr. with whom she shared an especially close relationship. Phyllis also leaves many nieces, nephews and a large loving extended family.

Services for Phyllis will be held privately.

Those who wish may make memorial contributions in her name to: National Audubon Society (www.audubon.org).