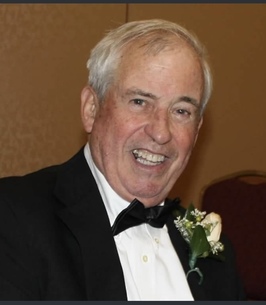 BOXBOROUGH: Peter Trowbridge Houston, a lifetime resident of Boxborough, passed away peacefully at home on Thursday, November 4th with his loving family by his side. He was 87 years old. Peter is survived by his loving wife, Ann Bennett Houston, of 62 years of marriage. He is also survived by his three children: Mark Houston, Scott Houston and wife Marci, Susy Houston Odegaard and husband Brad, and their ten grandchildren; Sarah, Emma, Nathaniel, Nolan, Cameron, Emily, Ethan, Benjamin, Mitchell and Amelia. He was predeceased by two daughters-in-law, Kathleen Houston and Debbie Houston.

Peter was born and raised in Hingham, MA, the only child of Agnes and Paul Houston. He was raised by his grandparents, Fay and Winthrop Trowbridge, in Hingham, MA and Naples, FL. Peter graduated from The Rectory School, CT, followed by Tabor Academy, MA where he played football and baseball. He attended John Hopkins University and received a Bachelor of Science degree in Aeronautical Engineering from Boston University. Following graduation, he earned his private pilot license. He worked as an engineer for Raytheon Missiles Systems for 25 years followed by Mitre Corporation until retirement at age 74.

Settling in Boxborough in 1960, Peter was very active in town serving on Boxborough Recreational and Conservation committees and as a founding member of the Boxborough Minutemen. He was also very involved in scouting and town sports; Assistant Scoutmaster Troop 1 Acton and Little League Coach. Peter was also very active at the Episcopal Church of the Good Shepard as a Sunday School teacher and served on the Vestry.

He treasured his family time at Lake Winnipesaukee, NH, Black Point Inn in Scarborough, ME and traveling on multiple trips throughout Europe and Alaska. Peter was an avid outdoorsman. His passion for hunting, fishing, camping, and hiking stemmed from his late, beloved grandfather. He was especially passionate about deer hunting in Strafford, Vermont with his two sons for over 50 years. Peter also enjoyed elk hunting in Colorado and bird hunting in Vermont with his brother-in-law, George Bennett. He was a longstanding member of the NRA and the Harvard Sportsman Club.

Peter found joy hiking and camping the Presidential Range in New Hampshire, summiting Mt. Washington multiple times up to the age of 70. He enjoyed bass fishing in his old town canoe and salmon fishing on Lake Winnipesaukee as well as taking in the beautiful sunsets. He loved fly fishing on the Swift and Pemigewasset Rivers off the Kancamagus Highway. Peter was an avid walker routinely walking five miles a day for many years.

More than anything, Peter cherished and enjoyed all the holidays and special times with his family. Peter's zest for life often entailed practical jokes on friends and family to spice up the day. Being married to Ann, he became a lifelong lover of golden retrievers which also became one of his passions.

The Houston family is grateful to all the caregivers who have helped over the past few months. Special thanks to his loyal companion "Seine" the golden retriever that always makes you smile.

Relatives and friends are invited to visiting hours on Wed, Nov. 10 from 4:00-7:00PM in the Acton Funeral Home 470 Massachusetts Ave. (Rt 111) Acton. A funeral service will be held on Thurs, Nov. 11 a 10:00AM in Trinity Episcopal Church 81 Elm Street Concord. Burial will follow in South Cemetery, Burroughs Road, Boxborough.

In lieu of flowers, gifts can be made to Dana-Farber Cancer Institute www.dana-farber.org/gift. or Appalachian Mountain Club (AMC) https://www.outdoors.org/donate/tribute-gifts/