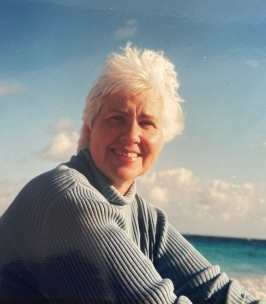 Nancy was born in Boston and graduated from Arlington High School in 1962. She attended one year at Newman Prep before enrolling at Mount Auburn Hospital (MAH) Nursing School, graduating with the class of 1966. Nancy was first introduced to her husband Donald through mutual friends at the Oxford Grille in Harvard Square. Donald’s family was immediately smitten with Nancy because she had the same last name and her parents came from Nova Scotia, just as Don’s. They fell in love and the couple were married in the fall of 1968. Shortly thereafter they moved to Randolph, MA. and had two little girls, Robin and Stephanie. Nancy worked the overnight shift in nursing while Donald finished college at Northeastern University. After a few years, they sold their house and moved to the suburbs of Acton in 1973 and had two more children, Matthew and Brittany. Nancy was drawn to her forever home at 47 Mohawk Drive because once she saw the large boulder rocks in the yard, she knew it would be a wonderful place for her children to grow up.

Nancy was a distinguished and hardworking nurse with a career spanning over forty-three years. Her first assignment was as a trauma nurse at Boston City Hospital. Shortly thereafter she discovered her passion for working as an operating room nurse and moved on to Burbank Hospital where she met and created lifelong friends. She finished her career at Emerson Hospital where she retired from nursing in 2009.

In 2011, Nancy was blessed and overjoyed at the birth of her granddaughter, Racquel Ross, affectionately named after Nancy’s brother. She had a new role and purpose in life and loved to be called “Grammy.”

Nancy loved to laugh and entertain at house parties while providing her guests with enormous amounts of food. Nancy, or often referred to as her nickname “Pixie”, was a lover of many things:

Christmas was her favorite holiday, and she was well known for spending weeks decorating for it while playing Christmas music. She was a world class baker and would make everything from chocolate éclair rings to cookies and her famous cheesecakes which everyone requested. She was a devoted fan of John Wayne “The Duke” and western movies. She never missed an episode of Blue Bloods while enjoying popcorn. She collected antique purses, tobacco tins, rocking chairs, blue willow China and Byers Choice Carolers. She loved going to flea markets and antique shops then stopping at Kimball’s Farm for Pistachio ice cream. Her favorite places were trips to Hampton Beach and Lake Winnipesaukee where many years of family memories were created. Nancy adored gospel and country music and you could always find her and Donald in the kitchen making breakfast on Sunday mornings listening to Sunday Morning Country Oldies on the radio. Once, she even set her cell phone ring to Toby Keith’s song, “How Do You Like Me Now?”

In the last years of her life, Nancy especially enjoyed vacations and visits from her Mount Auburn Hospital (MAH) nursing friends. She loved her family and daughters and wanted nothing more than to spend time with her granddaughter and watch her grow up.

In passing, Nancy lovingly leaves behind her daughters Robin and her beloved dog Chloe (Nashville, TN), Stephanie (South Boston, MA) and Brittany (Acton, MA). Her brother-in-law Daniel MacGillivray of Arlington. Aunt to Colin MacKillop, married to Riki of North Chelmsford, Kerry S. MacKillop of New York City, Courtney E. Darrough married to Dustin of Ventura CA, and Devon A. MacGillivray married to Neil Dawson of Drumshanbo, Ireland. As well as her many extended family members and nieces and nephews.

Nancy also leaves behind her precious grandbaby Racquel, who will miss her dearly and their trips to McDonald’s and Jones Field Playground.

We love you Nancy. We will all miss your smile, laughter and warm personality. As you exit this world just know that you are loved, and we have been playing your favorite country tunes in your honor. We especially enjoy listening to one of your favorite country music songs by Joe Diffie appropriately titled, “Prop Me Up Beside the Jukebox If I Die”.

In his words, “I’ll be the life of the party even when I’m dead and gone.”

The Morrison family would like to thank the wonderful caregivers who assisted Nancy in her last days.

A funeral service for Nancy will be held on Sat. July 30th at 10:30am at the Acton Funeral Home, Acton, with burial in Mt. Hope Cemetery, West Acton. In lieu of flowers, memorial contributions may be made to the Acton Food Pantry, 235 Summer Rd., Bld. #1, Boxborough, MA 01719.