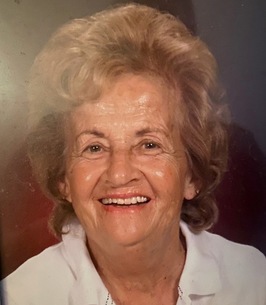 Mary Norval (Chisholm) Anelons, of Maynard, a former longtime resident of Stow, passed away peacefully June 6, 2022 at her home in Maynard with her family by her side. She was 85 years old. She was the beloved wife of the late George J. Anelons who passed away in 2015.

Mary was born in Cambridge, daughter of the late William and Charlotte (Clark) Chisholm. Mr. and Mrs. Anelons were married in 1955 and lived in Maynard for a short time before moving to Stow in 1961. She enjoyed time spent on Cape Cod and bicycle riding. She loved music, dancing, shopping and trips to Erickson’s in Maynard. She is lovingly survived by her five children, Terry Anelons and his wife Kelly of Harvard, Valerie Cole of Fitchburg, Barb Scesny and husband Tom of Lancaster, Tom Anelons and Patti Daulton Bean of Lunenburg and Lory Steeves of Uxbridge. She was the loving grandmother of: Dan, Patrick, Cody, Tanner, Adam, Charlotte and Megan great-grandmother of Olivia and Charli and sister of Barbara Ianarelli of Maynard and Daniel Chisholm and his wife Kim. She also leaves many nieces nephews and her beloved pets, Albu, Remy, Finn, Lily, Ollie, Marcus, Zena and Whiskey.

All are invited to a Memorial Service on Tuesday, June 14th at 10:00AM in St John Lutheran Church, 16 Great Road Sudbury. Burial will follow in South Cemetery, Burroughs Road, Boxborough. Gifts in memory of Mary may be made to the New England Center for Homeless Veterans, 17 Court St, Boston, MA 02108, also online at http://nechv.org