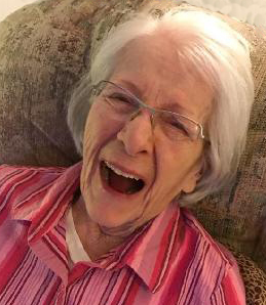 Born in Lowell, MA and raised in Cambridge, MA, she was the daughter of Thomas F. Hoban and Dorothy K. (Lorge) Hoban. She was pre-deceased by her brother Thomas (Thalia) and sister Susan (Armando). She was the beloved wife of 67 years to Lawrence Leonard “Pete” Holmes, Sr., who died in 2015.  She is the mother of Lawrence Jr., Pamela, Robert (Elaine), David, Gregory, and Dorothy (Christopher). She is survived by 10 grandchildren, 13 great-grandchildren, and many nieces and nephews. During her adult life, she was the adoptive mother to about 25 homeless cats.

Marti graduated from Cambridge High and Latin School in 1944. Although she worked for New England Telephone, Bachrach Photographers, and Hecht’s department store, as well as volunteered for Yesterday’s Rose, her main career was as wife and mother. She and Pete started raising children in Massachusetts, and over the years the family moved to Alabama, Florida, Germany, and Japan before settling in northern Virginia.

Upon retirement, Marti and Pete (and their beloved cat, Layla) relocated to Wrightsville Beach, NC, where they enjoyed the beach life but not the hurricanes. They eventually returned to Fairfax, VA. During her last years, Marti was cared for daily by her son, Greg, and the family deeply appreciates all he did to keep her healthy and happy.

Visiting hours will be held Friday, February 11th from 6:00-9:00 pm at the Acton Funeral Home, 470 Massachusetts Ave, (Rte 111) Acton. The funeral Mass will be celebrated Saturday, February 12th at 10:00 am in St. Elizabeth of Hungary Church, 89 Arlington Street, Acton. Currently the Town of Acton has a mandatory mask mandate for all public venues, which includes the funeral home and the church. Burial will be in Woodlawn Cemetery, Concord Road, Acton Center with a reception to follow.   For those who wish, in lieu of flowers, please consider making a donation in Marti’s honor to Salvation Army, St. Jude Children’s Research Hospital, or to a charity of your choice.