To share your memory on the wall of Marie Louise (Griffin) Licari, sign in using one of the following options:

Born and raised in Somerville, Marie was the daughter of the late John J. and Helen R. (Bergen) Griffin, with whom she shared a special fondness for frequent shopping escapades to their favorite downtown Boston department stores. She graduated high school from St. Clements in Medford. After playing “hard-to-get” with her classmate Phil Licari through those years, she finally capitulated and married her eventual lifelong love upon his graduation from the USNA. Prior to marriage, she worked at the Volunteer Cooperative Bank in Boston.

Marie and Phil raised four boys in Boxborough, all graduating from the Acton-Boxborough school system. While they spent many vacations in Cape Cod, their poolside cookouts and family gatherings at home were especially important to Marie. Her family meant everything to her: whether she was cheering on her sons at their team sports competitions, driving them to after-school activities, or participating in various parent groups associated with the schools, she was ever-present. Marie was also fixture at the local dentist’s office as an assistant, a job she performed for many years while her boys attended school.

Throughout her life, Marie built a closeness to each of her sons which in turn, extended to their wives: Philip and Caroline of Cape Elizabeth, Maine; Mark and Licia of Acton; Paul and Susan of Boxborough; and Peter and Linda of Fremont, California. In more recent years, she spent time creating memories and special relationships with each of her nine grandchildren: Libby; Kristin, Kerri, Kate; Leah, Philip, Ellie; Kerri and Tyler. And over the last seven years, Marie delighted in welcoming five great-grandchildren into the family: Charlotte, Griffin, and Lucy; Bella and Isaiah.

Marie is also survived by her sister Kathy Reidy and sisters-in-law Lillian Griffin, Lynn Griffin, and Vicki Griffin. She is predeceased by brothers Jack, Peter, and Bob and by sisters Anne Radocchia and Leah LaLiberte. Marie is survived by many nieces, nephews, and their families.

We encourage you to share your most beloved memories of Marie Louise (Griffin) here, so that the family and other loved ones can always see it. You can upload cherished photographs, or share your favorite stories, and can even comment on those shared by others.

Posted Mar 10, 2021 at 07:37am
Phil and Caroline, Sorry to read of the passing of Phil's mother. My prayers go out to the entire family may she rest in peace.
Bob Laurie, Framingham
Comment Share
Share via:

Posted Mar 09, 2021 at 12:20pm
I am so very sorry. My thoughs and prayers are with all of you. I have many wonderful memories of Aunt Marie and will never forget her. She will always remain in my heart. Mich love to you all. Tori Griffin
Comment Share
Share via:
JO

Posted Mar 08, 2021 at 09:02pm
I have so many fond memories of Mrs. Licari. She was always so kind and inspiring to her children and their friends. She was a great and wonderful friend to our family. God will watch over her soul and her loved ones.
Comment Share
Share via: 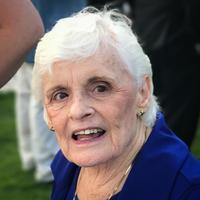