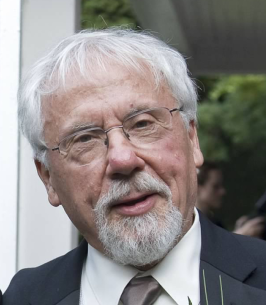 After a decade-long battle with Alzheimer’s disease, Larry L. Williams died peacefully in his home on September 16, 2022, surrounded by his family. Larry was born with the heart and soul of a musician in Beacon, NY, on March 29, 1941. After graduating from the Eastman Conservatory of Music, Larry enlisted in the Army and joined the US Army Band, where his first job after basic training was playing at the funeral of JFK. Following his service, he directed the band at Bishop Ireton High School in Arlington, VA, after which he spent a year in Switzerland, teaching piano and riding his bicycle around Europe.

From 1974 until his retirement in 2004, Larry taught elementary instrumental music in Bellingham, MA. In the latter part of his time in Bellingham, Larry discovered MIDI (Musical Instrument Digital Interface) technology, which ignited his passion for composing, instruction, and recording. During these years, Larry was often under his headphones, grinning while creating on his keyboard. Meanwhile, Larry could be found on any given Sunday playing the piano in local churches. After retirement, Larry continued serving his local community as an accompanist in a variety of settings: the Acton-Boxborough Junior High School chorus, the elementary chorus at Blanchard school in Boxborough, the pit band at school musicals, Open Door Theater, Theatre iii in Acton, and at weddings and funerals. His presence in these settings elevated singers and performers of all ages; and in the process, it delighted him.

Apart from his musical life, Larry spent his hours on his bike; moving rocks and making pathways to complement the rhododendrons on his property; splitting countless cords of wood; and enjoying the company of friends and family around the table.

Larry is survived by his wife of 43 years, Deborah Hess, by his daughters Abby (Austin) Sharpe and Hannah Williams (Rica Bryan); as “Dida” to grandsons, West and Cypress Sharpe; brother Glenn (Betsy) Williams.

A remembrance of Larry’s life will take place on November 5, 2022 at the Follen Church in Lexington Massachusetts at 3:00pm. If planning to attend (in person or virtually), kindly RSVP at tinyurl.com/larrywill.
In lieu of flowers, the family requests donations in Larry’s memory to Groton Hill Music Center, expanding access to quality music and music education.