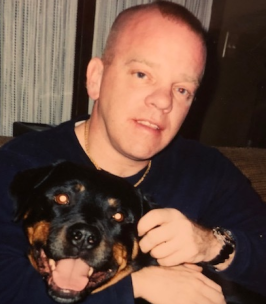 Born January 1, 1962 in Concord MA, he was the first New Years baby to arrive at Emerson Hospital.
He is preceded in death by his parents, Robert A. Wilcox and Elizabeth F. Howe-Wilcox of Maynard. He is the oldest of 3 siblings, Michael, Elizabeth and William.

He later moved to Arizona where he worked in private security for numerous companies up until his death.
John wore many different hats throughout his career and enjoyed many different hobbies including golf, riding his motorcycle, watching any and all New England sports, spending time with his dogs and coaching youth football for Acton/Boxborough.

Fondly known as “Boston John” or “Putz”, he loved nothing more than being surrounded by his friends. He loved to talk about anything to anyone who would listen.

He led such a full productive life and he was a friend to anyone who had the honor of knowing him.

He is survived by the love of his life Karen M. Roy of Connecticut. Devoted father to Molly O’Meara of Scituate MA and her partner Richard Nohelty. Cherished Granpa to Landon and Richard Jr. He is also survived by many nieces and nephews.

In lieu of flowers, contributions in his memory may be made to the JDRF Foundation at:
https://www2.jdrf.org/site/Donation2?2376.donation=form1&df_id=2376&utm_source=web&utm_medium=web_link&utm_campaign=bt1&utm_content=bt1_donation

or to the Bolton Fire or Police Department at 15 Wattaquadoc Hill Road Bolton, MA 01470