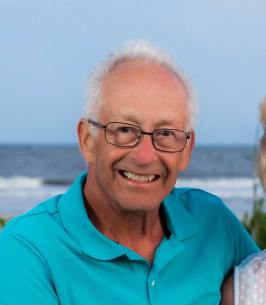 John “Jack” William Yates, 76, of Acton, MA passed away peacefully at home on February 17, 2022. He was predeceased by John & Dorothy Yates, George Yates, and Vincent & Anastasia Robertazzi. Jack was the beloved husband of Rose (Robertazzi) Yates, his devoted wife for 54 years. He was the loving father of daughter Michelle and her partner Casey Kuplin, son Christopher and his wife Kimberly, daughter Kimberly and her husband John Ruppert, daughter Kathryn, and son Michael and his wife Nicole. Jack was a doting and loving grandfather to Sydney, Churchill, Jack, Charlie, Aubrey, and Melody. Jack will be deeply missed by his family and many friends.

Jack grew up in Brooklyn, NY where he attended Xaverian High School and was a track and field athlete. He obtained his Bachelors in Electrical Engineering from Manhattan College in 1967. That same year he was commissioned in the U.S. Air Force and married the love of his life, Rose. Jack went on to obtain a Masters of Electrical Engineering from Rensselaer and an MBA from Northeastern University. Jack was stationed for two years at Brooks Air Force Base in TX and then two years at Hanscom Air Force Base in MA. He remained at Hanscom and worked for the Department of Defense for fifteen years. He later worked for Honeywell and then retired in 2012 from Raytheon where he traveled extensively throughout Asia and the Middle East as the Program Manager of the Hawk and Patriot Defense Missile Programs.

Many will remember Jack for his modest, soft spoken nature and kind, generous heart. He was a member of the Knights of Columbus since he was 18, and was active in the Catholic parish and community. Jack marched and fired his musket as an Acton Minuteman in Patriot Day parades, and was a regular volunteer whenever the opportunity presented itself. He walked hundreds of miles over the years for Boston’s Project Bread Walk For Hunger, presented awards at the Special Olympics, and more recently prepared sandwiches, and provided snacks and water to bikers during several Pan Mass Challenges.

He loved his kids fiercely and would do anything for them, and they knew it. He involved himself in all of their sports whether it was coaching baseball or enthusiastically cheering from the soccer sidelines and poolside. He helped them with homework, taught them how to swing a hammer, and do DIY projects. He meticulously strapped furniture in U-Hauls for multiple moves for each of his five children, but he did not have the stomach to mend injuries or the nerve to teach a novice driver; that he left to Rose.

Jack built our family home on Madison Lane, was our amateur videographer and family tree historian. He was a fixer of everything and a collector of stuff (Harley t-shirts, Disney VHS tapes, golf score cards, drink stirrers, state quarters…really anything) and he loved deals and freebies (senior discounts, informational pamphlets). Jack was also an artist. He creatively painted our playroom walls and his paintings of the Brooklyn Bridge and Times Square are displayed in our home. He was the king of puttering around and an extremely slow golfer. Jack traveled all over the world with Rose and his children and vacationed and cruised with friends and family. He was always up to experience the local food and activities - horseback riding on “Tiny” in Arizona even though he was afraid of heights, snorkeling in the Great Barrier Reef even though he couldn’t swim, and biking in Japan after not being on a bike in at least a decade. You could always count on Jack to go with the flow.

For those who wish, in lieu of flowers, please consider making a donation in Jack’s honor to Project Bread/Walk For Hunger (https://www.projectbread.org) or Care Dimensions (https://www.caredimensions.org) the nonprofit hospice that provided Jack compassionate care during his final days.