To share your memory on the wall of John J. Sullivan, sign in using one of the following options:

Provide comfort for the family by sending flowers or planting a tree in memory of John J. Sullivan

John was born in Boston in 1937, son of the late John J. and Bridget (Shea) Sullivan. He served proudly in the United States Army and was discharged honorably in 1958. A passionate sports fan, John supported all of the local Boston teams. A man of deep faith, he was a devout Catholic. John also loved to travel but more than anything he loved his family who will miss him dearly.

Mr. Sullivan is survived by his son Daniel Sullivan and his wife Patricia of Acton as well as his three grandchildren, Kerry Bailey and her husband Korey, Drew Sullivan and William Sullivan. He also leaves his sister, Mary Sweeney.

Relatives and friends are invited to visiting hours on Sunday, May 2nd from 3:00-5:00pm in the Acton Funeral Home, 470 Massachusetts Avenue (Rt. 111) Acton. A funeral Mass will be celebrated on Monday, May 3rd at 10:00am in St. Elizabeth of Hungary Church, 89 Arlington Street, Acton. Private burial will be held at the Massachusetts National Cemetery in Bourne. Those who wish may make memorial donations in his name to The Archdiocese of Boston, Catholic Appeal PO Box 9134 Canton, MA 02021-9134.
Read Less

Receive notifications about information and event scheduling for John J.

We encourage you to share your most beloved memories of John J. here, so that the family and other loved ones can always see it. You can upload cherished photographs, or share your favorite stories, and can even comment on those shared by others. 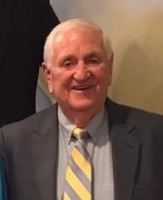