To share your memory on the wall of John F. Boothroyd, Sr., sign in using one of the following options:

Provide comfort for the family by sending flowers or planting a tree in memory of John F. Boothroyd, Sr.

A graduate of Maynard High School with the Class of 1949, Mr. Boothroyd served honorably in the US Army stationed in France and Germany during the Korean War. He was employed in the electronics industry with GenRad and Baird-Atomic before retiring. He then worked part-time at Aubuchon Hardware in Maynard for many years. Mr. Boothroyd was lifelong Ham Radio operator, WB1CAT, KC1WA. He participated in Maynard’s community theatre and volunteered at Boy Scout Troop 1 for many years. He loved all New England sports teams especially the Boston Red Sox. A fixture in his neighborhood walking his beloved Shelties, Penny and Scout. His greatest joy was spending time with Sally, especially in Maine or on the Cape.

Receive notifications about information and event scheduling for John F.

We encourage you to share your most beloved memories of John F. here, so that the family and other loved ones can always see it. You can upload cherished photographs, or share your favorite stories, and can even comment on those shared by others. 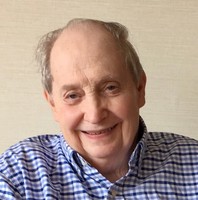