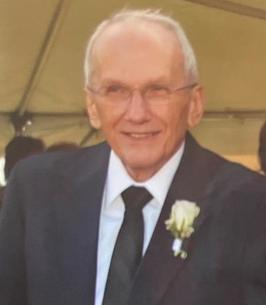 John Albert Thornblad, 92 years old, of Clinton, MA, formerly of Acton, MA, and Vero Beach, FL, passed away peacefully on Saturday, December 4, 2021, with his family beside him.

He was the son of the late Carl and Harta (Nelson) Thornblad. He was predeceased by his sister, Dorothea Lowrie, and his brother, Carl Thornblad.

His beloved wife and soulmate, Margaret, with whom he shared 50 years of marriage, passed away in 2006. He will be forever cherished by his three children, son Drew Thornblad, of Leominster, daughter Lauren Collins, of Stow, and son Dean Thornblad, of Clinton. He was Papa to his three adoring grandchildren, Megan Boyers and her husband Mikael, of North Carolina, Heather Manero and her husband Christopher, of Maynard, and Evan Collins and his fiancée Victoria Knipe, of Stow. He also leaves his four great-grandchildren, Mackenzie and Peyton Manero, of Maynard, and Emma and Avery Boyers, of North Carolina.

John was born and raised on a small farm in Busti, New York, and he attended a one-room schoolhouse through the 8th grade. He was brilliant beyond his years and skipped two grades, to graduate from Jamestown High School at the young age of 16. He then went on to attend Union College in Schenectady, New York. After two years at Union, he was drafted and joined the Navy during the Korean War. He served in the naval electronics systems command program and was stationed in Norfolk, Virginia, aboard the USS Saipan, and went to sea on a naval aircraft carrier to provide electrical engineering services. After his four-year stint in the Navy, John returned to Union College to complete his education and earn his Bachelor’s Degree in Electrical Engineering. He received a job offer right after graduation from RCA and moved to Haddonfield, New Jersey.

It was there that he joined a Young Adults Group at church where he met Margaret Camper. The moment their eyes met, they both felt an immediate connection and felt they had met before. They were married in August of 1956 and began their family. They moved their family to Acton, Massachusetts, in the summer of 1963 when John received a job offer from Raytheon, in Wayland, Massachusetts, where he designed radar systems for the government. He remained at Raytheon until his retirement.

With his quiet demeanor, kind smile and piercing blue eyes, and his unparalleled love and support for his family, John was the ultimate gentleman. He was adored by his family and was the most loving and precious man, whom his children and grandchildren considered to be an Angel on Earth. He was never happier than when he was spending time with his children and grandchildren. He and Margaret enjoyed time together with family and friends at their summer cottage in Maine and later at their winter home in Vero Beach, Florida.

Private graveside services for the family will be under the guidance of Acton Funeral Home, Acton, Massachusetts, on Thursday, December 9th.