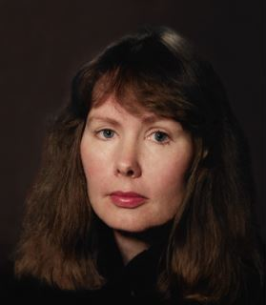 Joan Terrell Smith, mother of Caitlin and Larissa McGeer, and grandmother to Elliot Saball, passed away Sept 13. Her daughter Caitlin was by her side along with longtime friend and business partner, Carol Hayes and friend and younger cousin Meg Browne. She is survived by her daughter Caitlin, grandson Elliot and older brother David Smith and her dog Rowan. Her elder daughter Larissa passed away 11 months to the hour prior.

A skilled artist, entrepreneur, expert cook, and lover of small creatures, especially dogs, Joan held on for over five years after a diagnosis of pancreatic cancer. Her life had been spent following her passions of historical research, her artwork, political activism, and travel. At 19, she left Tufts and used her savings to move to London where she soon found a job, roommates with a pet monkey (the only animal she was not fond of) and spent her free time doing historical research at the British Library. Years later and still doing meticulous research, she described her first thrill of being able to read original manuscripts and legal documents. Thank you, Dear Joan, for your travels with us and your amazing brain. Standing beside you in front of a painting, an ancient garden or an abandoned site was such a delight; you could explain how Bruegel laid colors on top of each other to create depth and perception or the cultural and political history of how a site was developed, used, and then destroyed with lots of sarcasm and links to today’s world to boot. Joan was always a political activist, participating in campaigns and forever reading about politics and presenting a case that anyone who disagreed could not get round.

Joan is a testament to the power of following passions and learning on go. Inspired by her favorite Aunt, Margaret, a professional artist, and fellow historical researcher who had had to leave school during the depression and found work as an artist, Joan started painting and selling her work while in her teens. She later began a brass rubbing business with her boyfriend, later father of her two children and first husband, William McGeer of Zimbabwe. The quality of their work was so good that they were able to sell it to such institutions as the Smithsonian and St. John the Devine. They moved back to the US and began a business, Facsimiles, producing museum-quality reproductions of low-relief artefacts and, later, Joan and her daughter Larissa’s own sculptures. Joan and Bill also became parents to two little girls who soon were swirling round the piles of market ready artwork along with a pet bunny, the odd cousin, friends and pets that wandered in. And for the girls, it was a short run to the home of Omi (Edith Smith) and grandpa (Sidney Smith.)

To Joan’s Facsimiles team: Joan cared deeply for you, and you were all important to her. You helped made the company what it was. You may not know this, but Joan insisted that you were provided with the best healthcare and benefits the company could afford, sometimes eliminating her own salary to do so. Her brother wrote that she considered you family and that her holiday parties for you were amazing and always featured ambitious and meticulously executed culinary projects. He particularly remembers a many-layer Dobos tortes; many of you became lifelong friends. She was very sad to sell the company and say goodbye to “her” team.

In retirement, Joan went back to school to train as an artist, later painting murals on commission, including a Chagall reproduction on the domed ceiling of the Wang home. Joan finally settled on the difficult medium of pastels, winning prizes for their delicacy and unusual perspective. When Joan moved to France in 2005, she settled in Esperanza in the foothills of the Pyrenees (she later moved to Burgundy) and set up a studio with fellow artists. She was able to host her grandson, Elliot while he acquired his own footing as a young adult. It was also in France that Joan acquired her last two dogs, Frodo, and Rowan, who remained her closest and most adored companions. They came back with her to the U.S. in 2014 and were with her almost to the end of her life. Rowan is spending her days in the mountains and as promised by Joan’s cousin, is and will be well cared for.

We miss you Joan and believe you found that stairway you were looking for to take you “up there”.

In memory of Joan and in lieu of flowers, the family asks that donations be made to one of Joan’s favorite Moon Bear Freedom charities: https://freethebears.org