To share your memory on the wall of Joan E. (Strawser) Studlien, sign in using one of the following options:

Provide comfort for the family by sending flowers or planting a tree in memory of Joan E. (Strawser) Studlien

Print
Joan Elizabeth (Strawser) Studien, age 91, was called to her eternal home on May 18, 2021. Joan was a devout woman who loved the Lord and passed peacefully at home with her loving husband of nearly 70 years at her side.

Joan is survived ... Read More
Joan Elizabeth (Strawser) Studien, age 91, was called to her eternal home on May 18, 2021. Joan was a devout woman who loved the Lord and passed peacefully at home with her loving husband of nearly 70 years at her side.

After graduation Joan went to work for the U.S. Navy Department. While there, in the summer of 1950, on a blind date, she met her future husband, Earl Studlien, who was serving at the Patuxant River Naval Air Station. It was truly a match made in heaven and they were married a year later on June 16, 1951 at Luther Place Memorial Church. One year later, on their first wedding anniversary, Joan gave birth to Carol. In 1956 the young family, now numbering four with the birth of Sally, moved to Massachusetts. First living in Sudbury then in Maynard. In 1960 they settled in a new home in Hudson where Joan spent her remaining years.

Joan loved being with family and friends and co-hosted many large family celebrations with them. A devout Christian, she spent much time in devotion and prayer with friends. She was an active member of Mount Calvary Evangelical Lutheran Church, Acton. Joan enjoyed traveling and accompanied Earl in ventures to many distant countries.

We encourage you to share your most beloved memories of Joan E. (Strawser) here, so that the family and other loved ones can always see it. You can upload cherished photographs, or share your favorite stories, and can even comment on those shared by others.

Posted May 21, 2021 at 10:41am
Joan was my mom's sister. Marie Thomas. Marie passed away about a year and a half ago, followed by my fathers passing. (Bruce Thomas) just over a year ago. Bruce, Marie, Earl and Joan all met in Washington back in the forties or so. They were always very close. We always had so much fun with all my cousins and Aunt Joan & Uncle Earl.
God bless you Joan, say hi to mom and dad for me.
God bless you too Uncle Earl, and all my cousins.
Love you guys very much.

Posted May 20, 2021 at 02:21pm
My mom was a loving, kind, caring, and wonderful woman, mom and grandmother who always put her family’s needs before her own. She always had a smile on her face and lots of hug and kisses to give us. Although in later years I wasn’t always sure if she knew who I was, I knew that she loved me and that we were important to each other. God truly blessed us when he chose her to be our mother. I have a huge hole in my heart that will be filled with wonderful /cherished memories of my mom. I miss you so much mom but I know I’ll always have you in my heart and I’ll never be alone I take great comfort and peace in the knowledge that you are in God’s hands now I love you🙏❤️💔
Comment Share
Share via:
S

Posted May 20, 2021 at 12:03pm
Hi Grandma I thought about what to write and I could not think of anything because words cannot express how I feel about You or how much I Love You. I am Truly Blessed to have had such a Wonder and caring and Loving Grandmother in My Life, Thank you for being the special Person that You were.

Posted May 20, 2021 at 11:21am
Mrs. Studlien was my second Mom. I treasure the time I spent with her and all the things she taught me as a child. She will forever be in my memory, my heart and my soul. A wonderful! wonderful! person she will forever be.
Comment Share
Share via:
LR

May our Lord continue to bless Joan in her eternal life. Love bears much fruit and never ends. 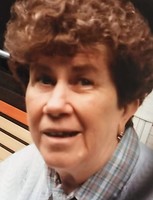