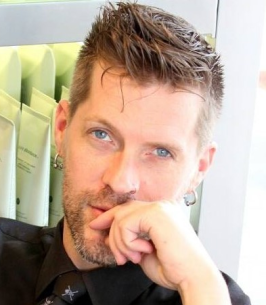 Jason Bortle died on June 2, 2022 after a long illness at the age of 47. Through a years-long, harrowing struggle with AIDS and cancer, he showed courage and optimism, always dreaming of what brighter things might lie on the horizon.

Jason was born in Oklahoma City and moved with his family to Acton, Massachusetts, where he grew up and eventually returned after living in Ohio and Boston. Shaped by early jobs with florists in the Boston area, he became a student of the visual arts and over his life lent his design skills to various businesses in the retail industry.

Outside of work he had a Gothic sensibility, decorating homes with his artistic creations and antiquing finds. He specialized in themed Christmas trees and crossover holiday decorations. His love for all things dark and mysterious extended to film, and he enjoyed attending horror conventions with his friends.

Jason enjoyed spending childhood summers on Cape Cod with his family and was well acquainted with the water. During his final weeks he reminisced fondly about a family vacation in Puerto Rico with his parents, brothers, and their families, during which he enjoyed floating in the ocean waves and snorkeling with reef fish.

He was also a foodie who enjoyed cooking, cocktails, and dining. He had strong opinions on taste, and in the end provided meals for his family even while he could not himself eat due to his illness.

Jason’s friends and family remember his wry sense of humor; he often broke the ice with a laugh and connected with others through his jokes and wordplay.

His lifelong love of animals meant he always had a pet, including several cats and a hedgehog.

He is survived by his parents Jim and JoAnn, his brothers Jeff and Scott, and his niece and nephew Kendall and Noah. He leaves behind a large family of cousins as well.

After the service, please join our family in sharing a lite meal downstairs in the church hall, where there will be an opportunity for friends an family to share words of remembrance.

In lieu of flowers, the family asks that donations be made to Fenway Health Center, which provided Jason with excellent medical care as a gay man with HIV, or Care Dimensions Hospice House in Lincoln, Massachusetts.