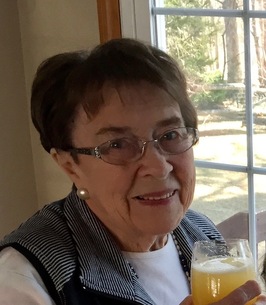 Irene (Fowler) Dow of Topsham, Maine and Acton, Massachusetts, peacefully passed
away on June 24, 2022, in Topsham, Maine. Irene was born in Dover Foxcroft, Maine
on April 2, 1928, the daughter of the late Max E. Fowler and Elsie Mae (Cudmore)
Fowler. She grew up in Dover Foxcroft and spent many hours at Sebec Lake, ME. Irene
graduated from Foxcroft Academy in 1946.

Irene married the late Russell Dow (Class of ‘41), also of Dover Foxcroft. They had their
first two children in Dover Foxcroft before moving to Acton, MA. Irene would spend
much of her life between Acton and Sebec Lake. Together Irene and Russell had 5
boys and she loved every minute of raising them. Dinners at the Dow home meant that
there was usually more than one extra person at the table. One of her greatest joys was
watching not only her sons grow but also her grandchildren and great grandchildren
grow.

Travel was a pleasure for Irene, and she went to many places around the world. After
her children grew up, Irene went back to school, completing secretarial and accounting
courses. She then worked for the Digital Equipment Corporation in Maynard, MA, as a
secretary for more than 10 years. An accomplished needlepointer, Irene made
everything from small pillows to a large floor rug. No project was too large, and she took
great pleasure in giving them away to friends and family.

Irene was predeceased by her husband, Russell Dow, and her oldest and youngest
sons, Russell A. and Thomas Dow. She is survived by her sons James and his wife
Elaine of Brunswick ME, Robert and his wife Lynda of Sterling, MA, and Kenneth and
his wife Gail of Acton, MA. She is also survived by a daughter-in-law, Debi, of Portland,
OR. Irene’s legacy will continue through her grandchildren Andrea, Stephanie, Megan,
Elizabeth, Matia, Jennifer, Alexander, Joshua, and Benjamin, along with her 12 great-
grandchildren.

In lieu of flowers, please consider a monetary donation to the American Cancer
Society.