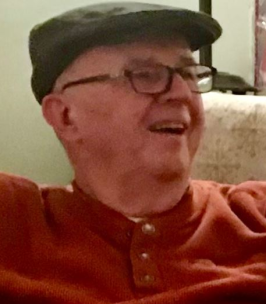 He leaves behind his wife, Ann Beauregard, two sons and their wives, Erik and Kelly and Dan
and Amanda. Along with two dearly loved and cherished granddaughters, Sabrina (11) and
Alexandra (9) All reside in Maynard.

He will be deeply missed by his sisters & brother-in-law Mary Lou and Steve Morgan, Kathryn
Symes, and Kerri Martinec, as well as many nieces and nephews. Herb was preceded in death by his sister Sandra Russello.

Herb was proud of his Maynard roots After graduating from BU and a short time teaching in the
Northbridge Schools, he came back to Maynard and taught for his entire career.
He did some coaching; he was the high school’s first girl’s track coach for many years. He
would later say it was the most fun he ever had coaching. After his retirement he continued to
volunteer with Maynard Athletics He volunteered with the Girl's Soccer Team for many years. A
sport he knew little about, but grew to love. He made some lifelong friends during those years.

Herb was a member of the MHS Hall of Fame Committee. These selfless people give their time
and energy to honoring Maynard’s finest athletes. He saw close friends, colleagues and family
inducted and took pride in his part. At the last induction (pre-covid), Herb was himself inducted.
He was so proud of this honor. It truly meant a great deal to him, so it was a joy to watch him
accept and to do so without too many tears. Those that know Herb really well will understand.

Never one to shy away from a good argument and always striving to do what was right, he was
the perfect man to lead the Maynard Teacher’s Union for several decades. He learned the fine
art of negotiation and became skilled in the give and take necessary to ensure fairness. Today,
teachers of his era have called on Herb for advice and counsel. He was always happy to help.

While he and Ann raised their boys, Herb also became a real estate broker. He worked for
several local offices. Most recently with Berkshire Hathaway Commonwealth Real Estate. He
was the same person selling as he was teaching. It was not uncommon, when showing a
young couple prospective houses and tensions were heating up, to pull the car over and
engage in a heart to heart. He would never sell a house just to make a sale. If he thought both
people were not fully on board, he’d put the brakes on and start with a little couples counseling.
He needed to feel good about it and know the couple would be happy because that was fair.

His private life, though mostly he told people everything, so not very private, was a classic
1950-1960s American life. He had lots of friends. They were all free range kids that went out to
play in the morning and came home when the street lights came on. They played pool, smoked,
and frequented the local steam baths. For a small town, he had friends from all backgrounds,
Finnish, Irish, Italian, Russian, Jewish, Polish and more. He knew their families, their cultures
and, best of all - the food! He could spend lots of time remembering all the special ethnic food.
It was a great community in which to grow up. He and Ann met when she was 13 and in the 8th
grade. Herb was a high school sophomore and a football player. The deal was sealed. It
started then and truly never ended. Herb went to as many high school formals while in college
as he did when in high school. They married in 1968 a month after he graduated from BU.
Except for a single year living outside of Maynard, they spent their entire married life in their
hometown. The boys grew up here and now his granddaughters are, too.

Herb was a decent guy with a soft heart for those in need. He gave more and supported more
people through tough times than most will ever know. He visited the sick and the dying for years
and years. Not just his closest friends and relatives, but people he heard about that needed a
kind face and a silly joke. He found humor in almost anything, so he was always a welcome
visitor.

As his wife, writing this obituary, I realize I am viewing the past with the wisdom of today. Herb
was not a saint He would never claim to be. He was a full time expert worrier. You could never
change that. It was who he was and his worries were always based on wanting to protect those
he loved even though it drove us crazy. He just tried his best to be kind and aware of his own
shortcomings. There is little more you can ask of a good man. He will be so missed.

It is suggested that anyone interested in making a donation in Herb’s name consider Boston
Children’s Hospital.