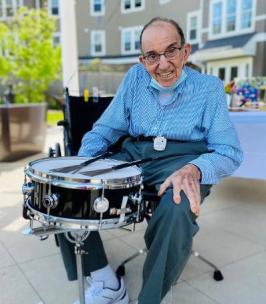 Gaetano (Guy) Ferrera passed away on Tuesday, March 2, 2022, at the age of 90. After several months of declining health, Guy died peacefully at home in Winchester, MA.

Born in Maynard, MA on May 16, 1931, to father, Vincenzo and mother, Luigia (Fanara) Ferrera, Guy was youngest child and the beloved little brother to five older sisters.

A love of music and drumming along with a strong desire to take care of his growing family led Guy to enlist in the military, joining U.S. Army band, and serving during the Korean War. Upon his honorable discharge, Guy went on to receive a Bachelor of Business Administration in Management from Northeastern University on the G.I. Bill. He then built a career in business management by day, while, throughout his life, still pursuing his passion as a professional drummer in several musical ensembles by night.

Guy had an infectious sense of humor, always ready with a joke or a funny story for anyone who needed a laugh. He was also a great lover of sports. Having played football in high school he enjoyed watching his favorite team, the New England Patriots, play and win six Super Bowl Championships.

Guy was preceded in death by his wife, Olga (Villani) Ferrera and his son, Stephen Ferrera. He is survived by his sister, Tina Moscarello; his daughters, Jayne Schmitz and Deborah Baldwin; and his grandchildren, Zach and Noah Schmitz and Grace and Guy Ferrera.

The Town of Acton has dropped the mandatory mask mandate. Visitors may choose to wear a mask or not based on personal preference.