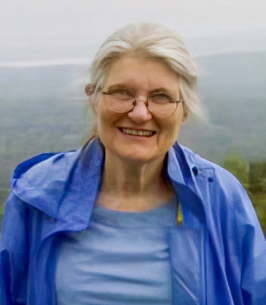 
Frona Brooks Vicksell died at the age of 88 on October 4th, after many years of living with cancer. She was a strong and independent woman, and an exceptional mathematician who was highly respected in her career as a software engineer.

Frona was the youngest of 7 children of two scientists in a Quaker family. Her father was the founder of the American Meteorological Society, and he served as director for both the Blue Hill and Mount Washington Observatories. Her mother was an award winning biology major who helped her husband with his publications and was active in UNICEF and in the League of Women Voters.

She spent her childhood going back and forth between Milton MA and Silver Lake NH, leaving the school year early and starting the next year late, to maximize her summer time at the lake and in the mountains of NH. She remembers her free-range childhood at Silver Lake with great fondness.

At home in Milton, Frona skipped 2 grades when young, and later took violin lessons at New England Conservatory. A classic “music-math” person, she won a first place math scholarship and started at Radcliffe when she was 16, but later changed to a music major.

Upon graduation in 1954, she almost took a job as a Music teacher at the Sidwell Friends school in Washington DC. But instead, she followed the advice of the career counselors at Radcliffe and took a job at MIT. Here, she launched her 60-year career as a software engineer of real-time navigation programs on the historically important Whirlwind computer, and by coding parts of the radar-based SAGE defense system at MIT’s Lincoln Lab.

After 2 formative years at Lincoln Lab, she went to Berkley in CA to pursue a graduate degree, starting with a MA in music. But it was not long until she talked her way into the Berkley math department, and got her MA in math instead. While there, she directed university vocal and early music instrumental ensembles.

She met her husband Ross while at Berkley. They married at Silver Lake NH in 1959, then returned to the west coast, where she programmed at Boeing in Seattle and taught assembly language and Fortran to other employees.

She and Ross returned to the east coast in 1961, moving to Burlington MA where they raised their two daughters. Over her career, she was a skilled software engineer of several modalities of navigation systems, working first at Iotron, then Megapulse, and lastly Northstar.

She made significant contributions to complex marine navigation systems through her work with Satnav, then later programmed radar and modern GPS navigation systems. She led the development and creation of shore-based systems for the high-traffic Rotterdam and Shanghai harbors, and then later devised and implemented the special transmitter timing controls needed for the French Loran chain. In the final years of her career into her 80’s, she was working on a long-term project of translating the Iotron collision avoidance assembly language program to C language to allow for future adaptations.

After her husband died, Frona moved from Burlington to the Conantum neighborhood of Concord. Moving into a house literally down the hill from where Jay Forrester of the Whirlwind project lived, she came around full circle by moving into this community formed by a group of MIT professors in the early 1950s. She happily remained in Concord MA for the last 22 years of her life.

One colleague recognized her abilities by saying “Over my long career in the Navy, she was the most brilliant programmer I’ve ever worked with, and that’s not hyperbole”. Another said “I literally felt a chill down my spine when she casually read machine language in hexadecimal format.”

Frona was a life-long lover of cats, an avid reader of the New York Times, and also enjoyed community gardening and feeding the birds in her later years.

She is predeceased by her parents, Charles Franklin and Eleanor Stabler Brooks, as well as her older siblings Edward, Margaret, Sylvia, Barbara and Edith. She is survived by her brother Norman Brooks of Pasadena CA, daughters Kate Vicksell of Watertown and Betsy Vicksell of Essex, son-in law Peter Morse of Essex, granddaughter Samantha Stabler Morse of NYC, and a multitude of nieces and nephews.
Gifts in her memory can be made to the Sierra Club or the Friends Committee on National Legislation. Services are private.