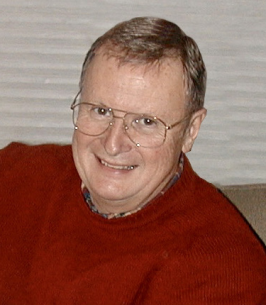 Preceded in death by his parents and his younger brother, Thomas Yale Pearson of Springfield, IL. He is survived by his wife of 58 years, Katherine “Katy” Griffith Pearson; his daughter, Penelope “Penny” Pearson (Patrick) O’Neil of Chicago, IL; his son, Robert Forrest Pearson of Pacifica, CA; his beloved and devoted grandchildren, Megan Katherine O’Neil, Ella Corinne O’Neil, and Zachary Edwin Pearson; his sisters Mary (Harold) Perkins and Ann Tucker, both of Springfield, IL; his cousins Carol Deen of TN and Bettye (Bob) Godwin of CA; and many nieces and nephews, most of whom were swung by their ankles as children by Uncle Ned.

He was a man of science who was analytic and innovative, an academic, a curious and compassionate person, a world traveler, sailor, skier, photographer, and tinkerer who loved cars, fine food, wine, standard poodles, nature, and classical music. He was deeply devoted to and supportive of his wife, his children, and his grandchildren.

Ned grew up on Lake Springfield in Illinois, attended Hazel Dell Elementary School, and graduated from Springfield High School. In 1960 he graduated from Yale University where he was on the lightweight crew team and Navy ROTC. He served 2 years in the U.S. Navy Reserve teaching physics at the Naval Academy Preparatory School in Havre de Grace, MD. He married Katherine L. Griffith on June 23, 1963 in Springfield, IL. 1968 he graduated from Duke University with a PhD in Physics, where his research in microwave spectroscopy was in association with Dr. Walter Gordy. From 1968-1974 he was an assistant professor of physics at Southern Illinois University at Carbondale. In 1974 he received a grant from the Humboldt Foundation for postdoctoral research in the physics lab at Justus Liebig University in Giessen an der Lahn, West Germany and Ed moved his young family to the charming village of Allendorf. For two years they lived like locals and had the great opportunity to travel throughout Europe and Scandinavia in their VW camper bus. Upon returning to the U.S., he accepted an appointment to the physics department at the University of Missouri at Rolla. In 1978 he left academia for a position with Laser Analytics in Bedford, MA, moving his family for the last time to Massachusetts. He was subsequently employed by Raytheon and TASC before retiring to his home in the woods and his cabin on the pond in beautiful New England.

Ed was a long time member of Acton Congregational church where his faith, the outreach, music and community grounded him and his family.

Parkinson’s Disease and NPH were brutal blows to a man who split his own wood, jogged daily, and was his own handyman. His determination to carry on despite these deficits was inspiring.

Due to the pandemic, a Memorial Service for family only will be held at Acton Congregational Church on November 28, 2021, at 2:00pm EST and streamed via live feed on the ACC Facebook page, available to view for 48 hours.

Outdoor celebrations of his life will be held in the spring or summer of 2022 in Massachusetts and in Illinois. His cremated remains will be interred in Illinois.


Arrangements and Memorial Page by www.actonfuneralhome.com