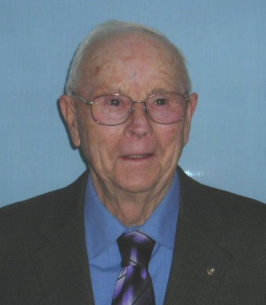 Edward W. “Bud” Flannery, a longtime resident of Acton, passed away peacefully on May 20, 2022 at the Care Dimensions Hospice House in Lincoln. He was ninety-one years old. He was the beloved husband of the late Joan (Cooke) Flannery to whom he was married sixty-five years at the time of her passing in 2018.

Bud was born in Concord, son of the late John J. and Violet G. (Riley) Flannery. He was raised in Concord and was a graduate of Concord High School with the class of 1949. He was a member of the Concord High School championship football team which held the win streak record beaten by Acton-Boxborough over 50 years later.
Bud was born a hard worker. He began working for his father’s business, John J. Flannery, Inc. as a young boy and continued to expand the company’s scope and operation for over sixty years. What started as building roads, grew to the construction of homes all over the local area. In the winter, he would plow snow including the railyard in Boston, often being away from home for days. This dedication and work ethic carried over to all aspects of Bud’s life.

A dedicated husband and father, Bud was a true family man. He supported all his children in their endeavors and could always be found cheering them on from the sidelines. He loved to entertain family and friends. He enjoyed cooking whether it was for just his family or the entire AB football team. He and Joan enjoyed traveling, especially to Bermuda and to their second home in Ogunquit, Maine. His travels with Rotary International brought him everywhere from England to Australia and New Zealand.

Bud’s countless contributions to his community are truly unparalleled. A founding member of the Acton Rotary Club since 1962, and past District Governor, Bud truly lived the “Service Above Self” moto every day. His particular contributions to the student-athletes of Acton included multiple renovations of the varsity football field, reconstruction of the varsity baseball dugouts and the creation of the Mass Ave tennis courts. He was Blue and Gold Award winner and member of the Colonial Club. He was also past president of the Monday Night Quarterback Club. Bud was a past member of the Planning Board and Recreation Commission. A past president of the Acton Chamber of Commerce, he helped begin The Acton Looks Good Contest as well as the Acton Town Fair. More recently, Bud was the distinguished recipient of Rotary International’s Service Above Self Award, the highest honor the organization bestows internationally. The impact of Bud’s generosity and dedication to the communities of Acton and Boxborough will surely be felt for years to come.

All are invited to visiting hours on Monday, May 23rd from 4-8PM in the Acton Funeral Home 470 Massachusetts Avenue (Rt.111) Acton. The funeral Mass will be celebrated on Tuesday May 24th at 10AM in St. Elizabeth of Hungary Church, 89 Arlington Street, Acton. Burial will follow in Mt. Hope Cemetery, Central Street, West Acton. Donations in memory of Bud may be made to either Care Dimensions Hospice 75 Sylvan Street, Suite B-102 Danvers, MA 01923; The American Parkinson Disease Association P.O. Box 61420 Staten Island, NY 10306; or the American Diabetes Association P.O. Box 7023 Merrifield, VA 22116-7023