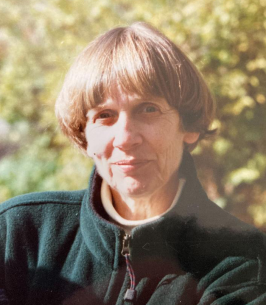 Charlene (Goudey) Golden, age 86, died peacefully on January 19, 2022 in the presence of family. Charlene was born in Auburn, Maine on July 19, 1935, as the first-born daughter of the late Clyde Goudey and Charlotte (Frost) Goudey.

Growing up in Auburn Maine, Charlene took enormous pride in her Maine roots considering herself to be a Mainer her entire life. She spent the early years with her family playing on lakes and at the oceanside of Maine. She was a high honor student at Edward Little High School where she developed her lifelong interest in science and the environment. She was a gifted student who participated in Chorus, Drama and the ELHS Marching Band. After graduation, Charlene pursued her academic interests at Bates College and graduated in 1957 with a B.S in Biology

After graduation, Charlene moved to Boston to work as a laboratory technician. In a chance encounter at church, Charlene met her future husband, Richard. Charlene and “Dickie'' were married for 51 years before his death in 2012. Together they raised two sons, Shaun and Devin. Balancing the demands of a young family, Charlene started her position as a Laboratory Assistant/ Science Lab Technician at Acton-Boxborough Regional High School in 1974. She remained in her role for the next 44 years. Charlene frequently used a portion of her summer to mentor high school and college students who were considering a career in biology or environmental studies.

Charlene was an avid sports fan and never missed one of her sons’ soccer, hockey or lacrosse games. She loved attending Red Sox games with Dick or cheering for the Boston teams on the television. Charlene loved animals, with a particular affinity for cats. She relished her time with her siblings and family at their family cottage on Bailey Island, Maine.

Charlene was a 50 plus year resident of Boxborough after moving to the town in 1966. During her time in town, Charlene was very active in town government and championed civic and environmental causes. She held town positions on the school committee, summer playground commission, and town election committee. However, her true passion was for nature and conversation. She joined the Boxborough Conservation Commission in 1972, attracted by the mission of preserving and protecting Boxborough’s undeveloped land and wetlands. Charlene spent over four decades building lifelong friendships and helping to steadfastly support the protection of Boxborough’s natural resources. She was unwavering in her support for the environment. Charlene was honored in 1990 with the Golden Fife Award presented to a Boxborough resident for outstanding citizenship and exemplary dedication to the success of the town.

In 2017, Charlene received her greatest honor when she was named Massachusetts Conservation Commissioner of the year. This prestigious award honored her for outstanding contributions towards environmental awareness in Massachusetts and for serving her community with honor and distinction. Charlene has been a leader in the protection of open space through various acquisitions for conservation, including the very first parcel of 203 acres in 1974. Over the years, Charlene’s efforts resulted in the acquisition of approximately 300 additional acres for conservation and recreational use. She also participated in the drafting of the Boxborough Wetland Bylaw in 1981, assisted in three subsequent revisions and drafted the Town’s consistent and perpetual Conditions. Her quick guide, “Caring for Your Septic System” is another example of her efforts to educate the public about safeguarding the environment as development expanded in Boxborough.

Later in life, Charlene and Dick were pleased to be able to spend precious time with their grandchildren and traveling abroad visiting France, Holland, Rome, London, Scotland and Ireland. Charlene will be remembered by her family for her sense of humor, natural curiosity, sense of fairness and love of family.

Charlene is survived by sons, Shaun and wife Jody of Cohasset, and Devin and wife Jennifer of Natick as well as grandchildren Ashleigh, Carly, Curtis, Corey, Jackson & Sarah. Sisters of Carolyn Goudey of Novato, CA & Claudia Frost of Bailey Island, ME and her brother Clifford Goudey of Newburyport, MA. She was preceded in death by her grandson Willem Golden (3/19/16).

A private family service will be held at the Boxborough South Cemetery.

A Celebration of Life and Remembrance for friends, colleagues and extended family will take place on Friday, May 6th at 4PM at The Sargent Memorial Town Library in Boxborough, MA.