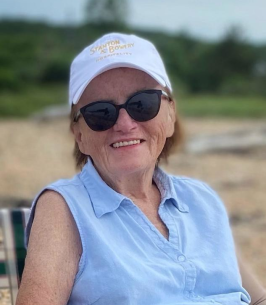 Carolyn (Leary) Wiegand, a long-time resident of Boxborough, passed away peacefully on Friday, November 26, 2021 at the Emerson Hospital in Concord. She was 77 years old. She was the beloved wife of the late Herbert G. Wiegand who passed away in 2019.

Carolyn was born in Everett, daughter of the late Cornelius and Natalie (Talbot) Leary. She was raised in Wakefield and graduated from Wakefield High School. She went on to study at the Leland Powers School of Communication where she studied broadcasting. She worked for a time for channel 56 in Boston and a number of smaller stations in Attleboro and in Rhode Island.

Carolyn met her husband Herbert in North Conway, NH. They were married and settled in Acton and then eventually Boxborough. She worked for over thirty years at Acton-Boxborough High School in food services, only retiring in 2018. She enjoyed time at the beach and by the ocean, particularly Montauk. She also enjoyed gardening, walking and reading. More than anything, she loved time spent with her family, especially her grandchildren.

Carolyn is lovingly survived by her son, Kurt Wiegand and his wife Ashlee. Her step children, Kenneth Wiegand and his wife Sally, Trudi Puffer and her husband John, and Lisa Ferguson and her husband Tom. She was the loving grandmother of 6 grandchildren, Reed, Kristen, Taylor, Julie, Leary and Lee and 1 great-grandchild, Vera. She also leaves her sister Susan Levine and brothers Stephen Leary and Michael Leary and their families.

Relatives and friends are invited to visiting hours on Weds. Dec. 1 from 6:00-8:00PM in the Acton Funeral Home 470 Massachusetts Avenue (Rte. 111) Acton. A brief prayer service will be held at the conclusion of the visitation. Burial will be in Fort Hill Cemetery, Montauk, NY at a later date.

Those who wish may make memorial contributions in her name to the Friends of the Montauk Library at the following link: https://montauklibrary.org/friends/donate/