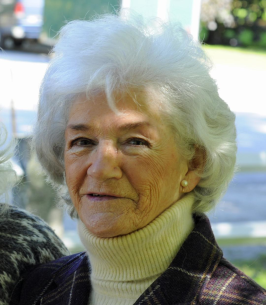 Anne M. Meehan, from Acton, MA passed away peacefully on Friday October 29, 2021, surrounded by her loving family. She was 92 years old.

Anne was born In Cambridge, MA on July 19, 1929, to Martin Peterson and Catherine O’Leary Peterson. She had an older sister Ruth and a younger sister Patsy, as well as a younger brother Jack. She grew up in Cambridge and married Francis X. Meehan at the age of nineteen. They remained happily married for 43 years until his death in 1991. With Fran she had five children, Jane, David, Jodi, Richard, and Peter. Her daughter Jane and husband John Brewer have two sons, Alex and Ben. Her son David is married to Vikki Rogers Meehan. Her daughter Jodi is married to Gina Savageau. Her son Richard and Roberta Kilfoyle have two sons, Dylan and Shane. Her son Peter and his wife Rachel Cohen Meehan have a son Jack and a daughter Karly.

After their wedding in 1948, Anne and Fran settled into a lovely suburban home in Acton, Massachusetts, where they lived for almost three decades and raised five children. At the end of that time, they spent a two-year stint in Boulder City, NV, then returned to New England and retired in Amherst, NH. Anne lived there for the next 20 years, suffering the loss of her beloved husband in 1991. In 2005, she returned to Acton to live with her youngest son Peter’s family and spent her final sixteen years with them.

Anne was a loving wife, mother, daughter, sister, and grandmother who was devoted to caring for and sharing the lives of the family she loved so much. That love was returned by everyone she touched, from her immediate family to her sisters Ruth and Patsy and brother Jack, her longtime Acton friends and neighbors, members of the Amherst Village Questers Preservation Group, and her large circle of bridge partners in New Hampshire and Massachusetts. She played socially with her husband Fran as partner, but Anne went much further, developing an amazing bridge skill that was the envy of all she played with. She graciously credited her success to “good cards,” but everyone knew she was a knockout expert who was always happy to engage in a friendly game—but rarely lost. Anne’s other great hobby and life-long passion was antique hunting and decorating. She set a high standard with her unerring instincts, style, and taste. Her homes were beautifully appointed and filled with classic objects. She took part in many antique shows with her daughter Jane, always bringing a sharp eye for finding great deals wherever they went. Her membership in Questers was a volunteer effort to preserve antiques and historical landmarks through fund raising projects in southern New Hampshire.

Anne’s enormous influence on her family and friends goes beyond our ability to express in words. She has been our wise and steady hand at the wheel, our mentor, and a loving presence for as long as any of us can remember. We will miss her more with every day that passes, while giving thanks that she was part of our lives for such a blessedly long time.

A private service will be held for Anne on November 5, 2021, at the Acton Funeral Home, followed by a service and interment at Woodlawn Cemetery. In lieu of flowers we encourage donations to the American Heart Association at www.heart.org.