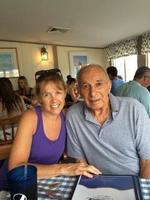 Albert James Saganich Sr of Osterville, MA passed away quietly Saturday April 16th at the Bedford Massachusetts VA, he was 92. He was the widower of the late Caroline (Carol) T. Saganich who preceded him in death in 2011. They were married in 1960 and enjoyed 51 years of marriage.

Albert, or Big Al as many knew him, was born in 1929 To Anthony and Francis Saganich. He was born and raised in Arlington Massachusetts with his brothers William (Bill), John, Joseph (Joe) and his sisters Loretta and Elizabeth (Liz). He was born at home in Arlington, and lived in Lexington, Acton and later retired to the Harwich and then Osterville on Cape Cod.

Al joined the Army in 1951 and was stationed in occupied Germany until honorably discharged in 1953.

Al spent his life as a carpenter, wood worker and general contractor, building many homes, most of which in Acton, where Saganich Brothers construction was well known. Al loved the sea, his dogs, boating, gardening and just puttering around the house. He had a sly wit, and was quick with a joke.

He is survived by his four sons, Scott, Al Jr & his wife Victoria, Mark, and Michael & his wife Caroline, as well as his grand children, Albert James III (AJ), Jacquelyn, Alexandra (Alex), Elihu (Eli), Jake, and great grand daughter Marie, not to mention many nieces and nephews.